“I love that this is our [national ALA focus] this year,” Noreen Nickerson-Cruz said. “People don’t really think about caregivers and how much they do.”

While getting her master’s degree in social work at Arizona State University, Nickerson-Cruz participated in a support group with the Alzheimer’s Association, leading to the interest in her thesis — The Self-Reported Benefits of Support Group Participation for Caregivers of Patients with Alzheimer’s and Dementia. 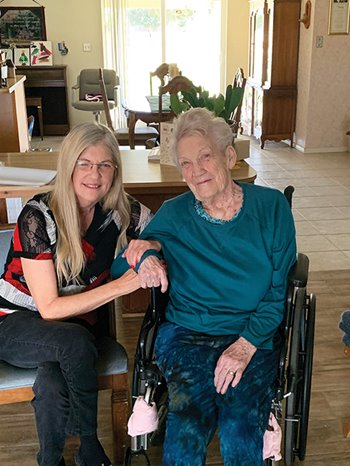 “I already knew people who had cared for those with Alzheimer’s and dementia and had seen how much these people had been helped when discussing their problems with the people in the group,” she said.

Seeing these groups in action brought to light to Nickerson-Cruz the challenges caregivers face — some of which can be addressed before becoming a caregiver.

“Roles are going to change,” she said. “What are the things in the family that the person who has been affected by whatever has happened, like dementia? What are their main functions? Have they always been the ones to pay the bills, always doing the driving? They won’t be able to do that anymore. So, while they are still capable, teach the other person how to do that.”

This is something she saw most often in the group — one person did everything, and the other person was unprepared and had no idea what needed to be done.

After her husband passed away, Nickerson-Cruz wanted to move. A house came up for sale next to her mother’s, who didn’t need help at the time, but she knew it might come up someday. Nickerson-Cruz was there less than a year when Audrey had a severe stroke.

She transitioned from teaching others how to handle the various complications of caregiving to being a caregiver herself for her 95-year-old mother.

Caregiving has been difficult to say the least.

“The main concern is all the safety issues,” she said. “That’s why I have cameras set up in her house, so if she slips or something, I can check on her and make sure she is OK.”

At night, Nickerson-Cruz’s great niece sleeps at Audrey’s house. It’s nice to have someone there if something would happen, she added. It helps her to worry a little less.

“For a while, I just had to move in with her,” she said. “I was so worried about what was happening at night. I’m back at [my] home again.” 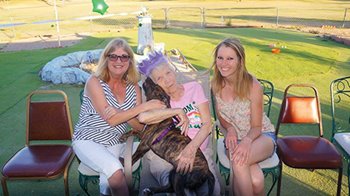 One difficulty she faces as a caregiver is isolation. As Auxiliary members who may not be caregivers yet, Nickerson-Cruz suggests making a phone tree to divvy up who calls which caregiver on which day, so they are checked on multiple times throughout the week to help battle isolation.

“Let them know you are thinking of them,” she said. “It would be wonderful if someone could stop in and visit — even just 10 to 15 minutes gives them someone to talk to.”

Having experience with support groups and now being a caregiver herself, Nickerson-Cruz offers advice.

“The one thing is, in any way possible, plan ahead,” she said. “Especially make sure people have medical power of attorney before a person diagnosed with dementia is no longer valid [in making decisions]. Not only have them in place, have a long discussion about what their wishes are.”

Additionally, for those caregivers who may be older, Nickerson-Cruz encourages ALA members to help them by getting something in place through the Auxiliary or through a local church where someone is available to take the caregiver to get groceries, go to doctor’s appointments, and more.

“Don’t be passive — be proactive and try to help those at home who can’t leave because they are caring for someone else,” she said. “Don’t say, ‘What can I do?’ Say, ‘This is what I’m going to do. I’m going to drop off groceries on Wednesday,’ for example. Be direct.”