American Legion Auxiliary members work the mission in various locations throughout the country — at post homes, outside of grocery stores, and even at baseball games. 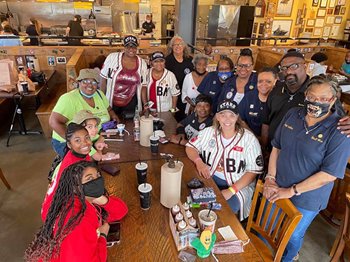 There are always opportunities for the Auxiliary to be a public face, especially with crowd numbers we aren’t typically visible to.

The Negro League Legends Hall of Fame (NLLHOF) hosted the 18th Anniversary Celebration Week Aug. 5-8 in Bowie, Md. The highlight of the week was going to be the baseball game, played by former Major League Baseball players and collegiate players dressed in vintage attire appropriately representing the diversity of players. Unfortunately, Mother Nature had other plans and rained out the game.

However, up to the point of cancellation, the American Legion Auxiliary was part of the event. The ALA’s involvement began with a partnership between Unit 233 President Mayvee Smith and NLLHOF founder Dwayne Renal Sims. He wanted to bring in veterans for the game by making sure all The American Legion posts in the area received free tickets for veterans. In previous years, Smith drove around to posts to hand deliver the tickets.

This year, the Legion took on a bigger role with that, and the Auxiliary instead focused on selecting someone to be part of the ceremonial first pitches. Smith suggested to Sims that a representative from the national American Legion Auxiliary organization could do the honors.

ALA National President Nicole Clapp was one of a handful of people nominated to throw out the ceremonial first pitch.

“For me, it’s very exciting,” Smith said. “Especially with it being the Negro Legend Baseball Game. What a lot of people don’t realize is there were white players in the Negro League, and it wasn’t just African-Americans. Also, women.”

The American Legion Family involvement in this event was crucial. 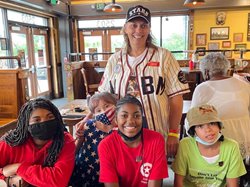 In addition to the senior ALA members, younger Junior members were part of the Auxiliary’s involvement by wearing branded clothing, and having lunch with Clapp.

The NLLHOF donated 5,500 tickets to youth organizations and the families of our United States military service in Prince George’s County along with the Maryland American Legion as a partner this year.

“Dwayne brings in some of the old players who played in the Negro Baseball League, and they come and sign autographs and families come,” Smith said.

According to its website, the vision of the Negro League Legends Hall of Fame is to educate the young and old about contributions of the Colored Professional League and the negro leagues in American baseball history. There were over 3,000 players who played from the 1900s to the early 1960s. They were the pioneers in a league of some of the greatest players to play the game of baseball. Segregation kept them from playing in the white major leagues until Jackie Robinson officially broke the color barrier in the modern era, but they played integrated.

For other ALA units across the country with a baseball league nearby, Smith offers advice for getting involved with community games. 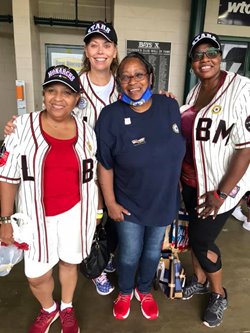 “Go to [the baseball league] and ask them to be a part of it,” she said. “Ask them to throw out a first pitch, set up a table at their games. They are very open to you doing that.”

She added another suggestion — give free tickets to veterans to attend, perhaps around a Veterans Day game. Additionally, be sure to ask your Legion post to participate and work together. If the post and unit come together and plan something, it would likely be a more successful event.

The possibilities to get involved in our communities are endless!

To view more photos of the weekend, visit www.Facebook.com/alanationalpresident.