This is why Kristen Hensley keeps her ALA membership.

“I’ve never felt like I belonged anywhere, a perpetual outsider. Joining the Auxiliary, I have been empowered and taken out of my comfort zone, allowing me to increase confidence in myself, discovering strengths I never thought I had, while working on weaker areas in a safe and encouraging environment. Change comes from growth.” 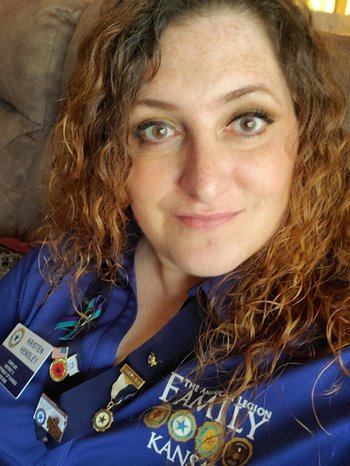 A member since 2017, Hensley’s eligibility for membership comes through her husband, Doug, although she also has several family members with ties to the military. Doug saw The American Legion Riders and was inspired to go to the post and sign up. He encouraged Hensley to join as well.

“I have a quirky personality and I’ve always felt like an outsider everywhere I’ve gone,” she said. “Not that anyone did anything; I just felt out of step. I think for women particularly, that is a common feeling.”

Her husband convinced her to join the Auxiliary.

At first, she had fun participating in activities and meeting different people, including department and district-level members. About a month and a half into membership, her unit needed a secretary. She volunteered to fill the role.

After, the outgoing district president convinced Hensley to become the district chaplain.

“It was people pouring knowledge into me and encouraging me to step outside my comfort zone,” she said, about agreeing to fill different roles. “In doing that, it gave me confidence. I’ve never had that in anything I’ve done. It made it clear that everyone is different and to embrace each other for these differences because with those differences comes different strengths.”

Hensley added that being part of the ALA has given her strength she didn’t know she had.

In addition to gaining leadership experience, her ALA membership has also helped her with public speaking.

“If you don’t think you can speak in front of people, there’s nothing like a debate over an issue that you have to vote for and have to get up and speak to voice your opinion and how quickly you get over your fear of public speaking,” she said. “I don’t think people realize it helps them become more articulate and it’s a confidence builder.”

To help Hensley with growing her confidence, public speaking abilities, and more, she has taken advice from those mentoring her as she continues to get further involved in the ALA. She talks at least weekly with her district president and has also been encouraged by past presidents at district meetings, as well as Past Department Presidents.

“They are always there, just a phone call away,” she said. “If I have a question, they will drop everything just to answer that question, and they don’t make me feel stupid. They know I want to learn.”

Those who mentor Hensley are always reminding her they are there to help. Having good mentors is a motivating factor to continue membership in the ALA.

Hensley offers advice to potential members who may join and how the ALA can help them in the ways it has helped her, especially with confidence.

“As you build your confidence, if you have a wacky idea for a fundraiser or event, say it,” she said. “Like everybody says, if we constantly do things the way we’ve done it, we will never grow.”

Hensley also offers advice for new members who aren’t yet involved and how to get outside their comfort zone, like she did.

“Anytime someone asks for help for something, volunteer — put yourself out there,” she said. “You aren’t going to grow, and confidence won’t grow until you step out. You will have plenty of support.”

That confidence has blossomed, leading Hensley to talk to more members, making more friends — friends who have become like family.

“Even outside Legion and Auxiliary stuff, we have become close,” she said. “We are working for the betterment of veterans and communities. The bonds you make with people here are stronger than anywhere else you make them.”

Hensley said she has found her place with the ALA.


Tell us why you renew your American Legion Auxiliary member dues every year. Email ALAMagazine@ALAforVeterans.org.