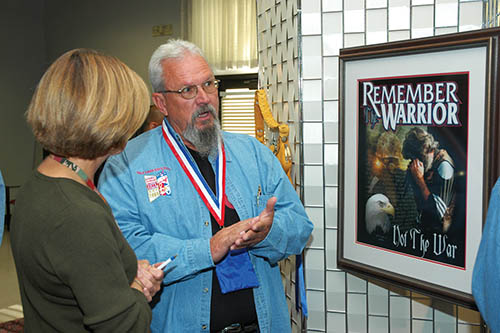 Bill Elkins talks about his gold medal winning piece, Remember the Warrior, at the 2004 NVCAF in Salt Lake City, Utah.

A veteran stands next to his artwork, explaining the details of what led him to create the piece. Nearby, another veteran shares an excerpt from her creative writing story, detailing how the arts have helped her overcome her PTSD. Soon after, the stage lights are dimmed as the next performer readies himself. He begins to strum his guitar, a soft melody pulsating out over the auditorium audience.

Welcome to what the National Veterans Creative Arts Festival (NVCAF) is all about — the therapeutic healing power of the arts. 2020 marks the 40th anniversary of the event and the ALA’s 20th anniversary as a co-presenter. The event brings together creative veterans throughout the country who made it to the national level after competing at local U.S. Department of Veterans Affairs facilities.

Because of the COVID-19 pandemic, this year’s Festival will be a virtual, at-home event the week of Nov. 30. Despite the change to NVCAF at Home, veteran artists across the country will still get to take part in the event to commemorate their hard work.

“The NVCAF is a testament to the therapy that is happening daily in the VA’s national health care system across the country, utilizing the creative arts therapies in rehabilitation and maintenance of physical and mental health,” said Elizabeth “Liz” Mackey, who was part of NVCAF since 1986 and was the previous national director for 23 years. “The Festival showcases the artistic achievements of veterans, and many stories of the veterans’ life challenges are told through their art, music, dance, drama, and written work.”

The history of the Festival is long and rich, leaving a positive influence on hundreds of veterans over the years who have benefited from the arts. The event is co-presented by The U.S. Department of Veterans Affairs and the American Legion Auxiliary.

“It’s rewarding to us to support and sponsor it and help veterans take relief from their daily routine,” said ALA Past National President Kristine West, who helped get the Auxiliary involved with NVCAF back in 2000.

The two events merged in 1989, and the drama and dance divisions were added to create the National Veterans Creative Arts Competition and Festival. This event was designed to spotlight the four creative arts therapies of art, music, dance, and drama.

A fifth creative arts division, creative writing, was added to the competition in 2005.

In 1999, the Washington, D.C. VA Medical Center was preparing to host the 2000 NVCAF. Mackey said there was a need for a sponsor who would serve in a long-term role and become a partner with the VA. A meeting took place between the VA and West, who agreed to highlight the Festival during her term as Auxiliary national president. She wanted to focus on veterans as her special-emphasis project. She asked the national presidents after her to also support the program — not as their special project, but at least to promote the program so the sponsoring could continue.

West said she can’t believe it’s been 20 years since the ALA first got involved.

“It just blows my mind,” she said. “Time goes by so fast. I think it’s wonderful we’ve kept it in the limelight. So many people have embraced it around the country.”

In 2004, a memorandum of understanding between the VA and American Legion Auxiliary was signed, with the Auxiliary officially becoming the co-presenter of NVCAF, which significantly increased awareness of the program among ALA members and throughout communities across the country, Mackey said.

With local competitions held across the country, the ALA plays a large role in helping those succeed. Members have been big supporters of these local showcases through volunteering —serving refreshments during the shows, helping with the setup and judging, escorting veterans from the medical center to and from the events, and through monetary donations.

In recent years at the national Festival, the ALA has sponsored a social where companions of attending veterans learn of VA resources available to caregivers. Additionally, ALA members serve in areas such as meal counting, the costume room, and are a source of support for veterans by lending a hand and a listening ear when needed.

The NVCAF has continued to be a prime example of the American Legion Auxiliary’s mission.

“The Festival aligns with our mission of caring for the veteran, which is what the Legion was founded for — care for veterans, widows, and orphans right after World War I,” West said. “We knew back then they had to care for the ones who were wounded after war. The mission that was established over 100 years ago is still caring today for veterans.”

The ALA’s mission has helped guide members and volunteers over the years in playing this crucial role in helping our nation’s veterans.

“It’s important for caring and the support to the veteran who is still suffering in many, many ways,” West said. “A lot of them still have PTSD and they are just so down — it’s a great way of promoting them and helping them learn. You can tell just by talking to them how much enjoyment and satisfaction they are getting from doing their work.”

Helping our veterans focus on the arts is invaluable to their overall well-being.

“Participation in the creative arts therapies provides veterans with ways to express themselves that may not be possible through more traditional therapies,” Mackey said. “This participation may lead to self-discovery, increased self-esteem, and relief from depression and anxiety.” 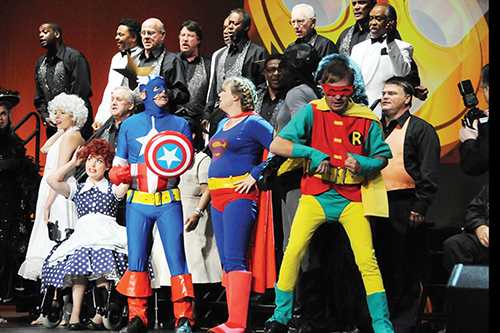 Mackey said it’s important for a variety of reasons to have a Festival like this for our nation’s veterans. It motivates veterans to set goals for themselves and gives them the opportunity to receive recognition for their creative accomplishments.

Year after year, Mackey has hoped veterans take away a sense of confidence that encourages them to pursue the arts and perhaps other life goals.

“By sharing their art, other veterans may strongly identify with the creative work as it could represent something similar to what they have also experienced,” she said. “It speaks to them and tells their story too in a way that perhaps they found difficult to express, and even though the veteran who created the work may never know their impact on others, it’s important to keep this in mind.”

The ALA has had a positive impact on this Festival for 20 years and counting, making our involvement in the event key to our nation’s heroes, their health, and well-being.

For ALA members interested in helping, West suggests visiting their VA and asking how they can support the Festival.

“I encourage you to get involved in the local level to witness it and help,” West said. “Local events are always looking for supplies and judges.”

Final preparations are being made for this year’s at-home event in late November. Despite the change, the importance and impact of the Festival at the local and national level is still being felt from the past four decades and will continue to make a difference for veterans in future years.

Although the Festival has switched from on-site to virtual for 2020, veterans will still be celebrated for their artistic talents, sharing their artwork, creative writing pieces, and stage show performances, just in a different format.

“I am looking forward to the future of the NVCAF while feeling grateful and appreciative of the past,” said NVCAF Director Amy Kimbler. “Our team is excited to build on experiences and bring new challenges and artist opportunities to veterans.”

To learn more about NVCAF and how the American Legion Auxiliary supports the event, visit http://www.ALAforVeterans.org. Be sure to check out the February 2021 issue of Auxiliary magazine to see our coverage of this year’s Festival!