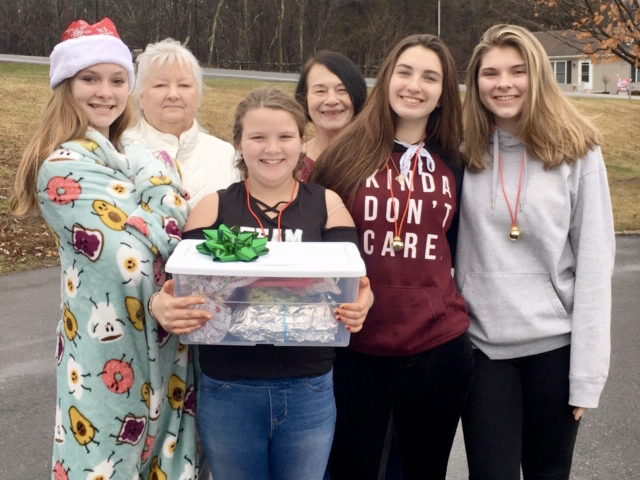 Juniors from Unit 60 in West Virginia were just performing another American Legion Auxiliary Service Not Self act of kindness for a veteran. They never expected to receive a thank you poem in return.

World War II veteran Bob Rowland was chosen, along with two other recipients, to be part of a service project by the Juniors.

The Juniors made lasagna, salad, bread, cookies, and an ornament and delivered it to Rowland and the others during their December Junior meeting.

Rowland, who is in his 90s, is a WWII merchant Marine veteran who is a member of the local post, often there to help wash dishes and make pizza. He is also a bingo caller every Wednesday.

Rowland hand-delivered a thank you poem, along with his homemade fudge, for each of the girls. 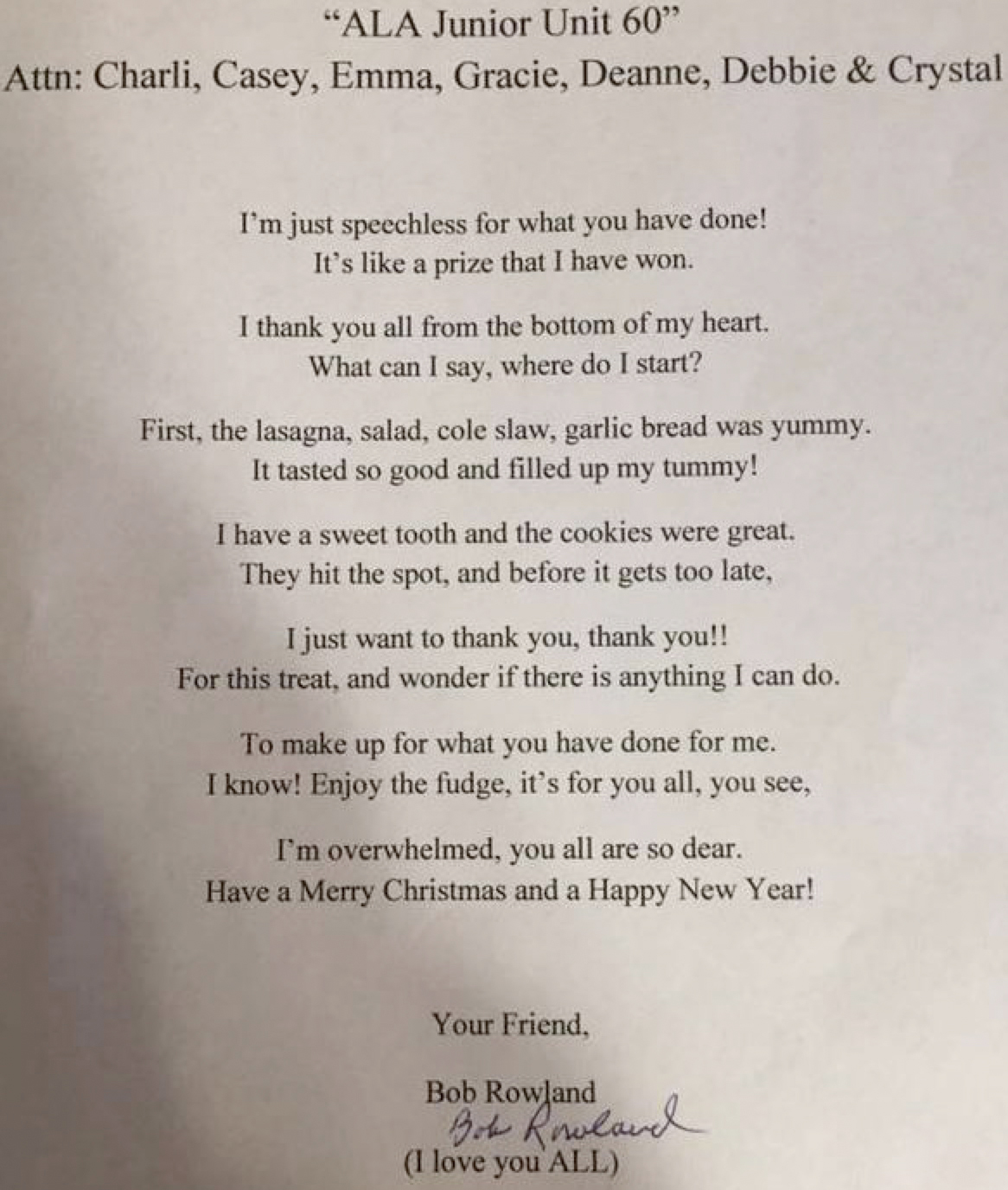 Poem that Bob Rowland wrote to the Juniors.

“The Juniors were surprised that their act of kindness resulted in such gratitude,” Crystal Chapman, Auxiliary Junior Unit 60 chair, said. “They felt pride that such simple things can create big meaning for others. Plus, they loved the fudge.”

Giving back to our veterans is always done selflessly, not expecting anything in return. But for these young women, who are our future leaders, for them to receive this thank you from a veteran, means everything, Chapman said.

“It proves that taking time for others — by serving others — can have outstanding affects,” she said. “Service to others is our main goal and receiving thanks is the icing on the cake.”

For the Juniors, the experience was a great life lesson on the importance of giving, Chapman said.

“I want them to see that little things matter to people,” she said. “To make this world better, we act in our own capacity to help and serve others. That is really what makes this country and our world so great.”

In addition to Rowland, the Juniors visited two other people for their service project. Auxiliary member Bobbi Johnson had an emotional reaction when the Juniors brought the items to her. 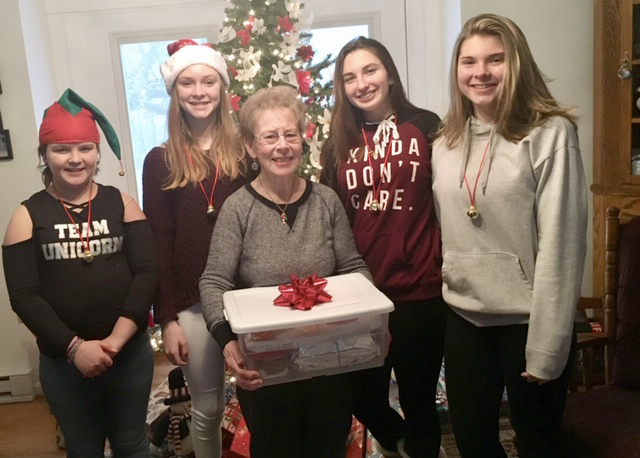 “Bobbi cried when we delivered her gift,” Chapman said. “She said it was the best Christmas present she ever received.”

Johnson is known for baking, so the Juniors decided to bake for her, which she appreciated the change of pace. 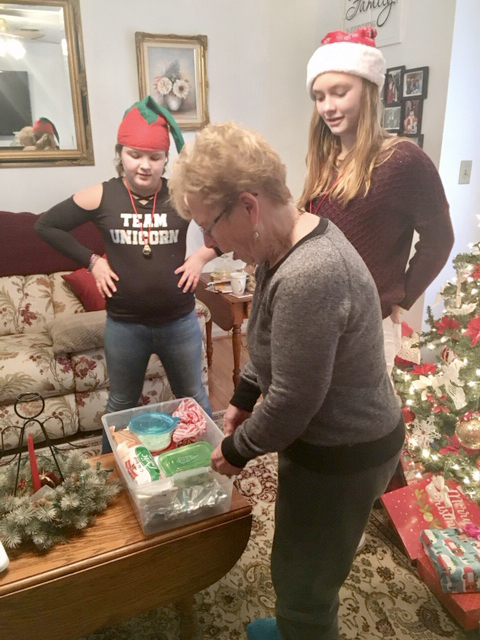 She even mailed a donation to the Junior unit after the delivery, which also led to her sister sending in a donation.

The Juniors also visited Korean War veteran Jim Miller. This is his first year without his wife at home because she has been admitted to a nursing home. He eats at The American Legion Post 60 every day by himself and then visits her.

“Due to the coldness during his time in Korea, he does not have full function of his hands,” Chapman explained. “So when we visited him and asked how he was, he told us of his failing health. I am a nurse so I stayed after our visit to help him with his medications and medical devices that he couldn’t operate because of his hands.”

All three were very thankful for the kind gesture from the Juniors. 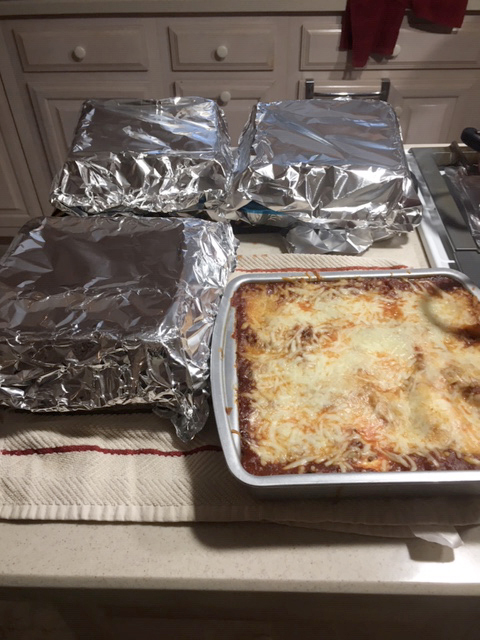 The Juniors made quite a bit of food to deliver for their service project.

Through reaching out to these three people, the Juniors were able to better understand the importance of The American Legion Family in the lives of our veterans, military, and their families.

“Sometimes I wonder what these veterans would do if not for the family of The American Legion,” Chapman said.

The Juniors are now saving up money to go to Washington, D.C. in the spring to see national monuments and government buildings in our nation’s Capitol.

Chapman is very pleased with the turnout of this service project and the life experiences the Juniors gained from it.

“I am honored to work closely with many of these members and with our Juniors, who I treasure,” she said.