Before becoming Miss America 2018, Miss North Dakota 2017, and an Ivy League college graduate, Cara Mund was — and still is — an American Legion Auxiliary member. Her 24-year continuous membership dates back to her infancy. Mund’s mother, aunt, cousin, and grandmother are also ALA members. Her late grandfather was past commander of The American Legion Department of North Dakota. Mund, an ALA Girls Nation alumna, shares her ALA story. 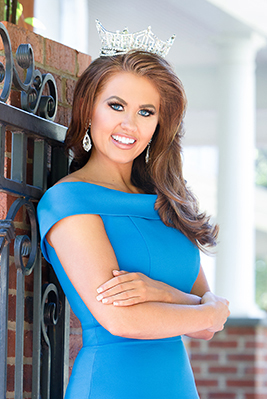 What have you gained or learned from being an American Legion Auxiliary member, and from your experiences in ALA Girls Nation and ALA North Dakota Girls State?

I really think it’s what fueled my interest in government. I loved my experiences at ALA Girls State and ALA Girls Nation. There, I built strong friendships, and I developed my leadership skills. I also learned a lot about the political process, how a bill becomes a law, and how to serve as a representative of others.

Why did you continue your American Legion Auxiliary membership into adulthood after being a Junior member?

It was my ALA Girls State and Girls Nation experiences. Also, I really understood ALA programs, and what ALA stands for. It’s not only supporting our military, it supports young women coming up. I knew that it was, and is, an organization I am proud to be part of. I knew it was something I wanted to continue as an adult.

Was there a special ALA moment that positively affected you?

As part of ALA Girls Nation in the summer of 2011, we went to Walter Reed (Medical Center). We sang some of the songs for the patients there. One of the wounded warriors was laughing. He thought it was kind of comical because we were stepping out of beat and all. He said to me, “It’s so great to see all of these young people coming out here, especially someone so close in age to me.”

I think he was 18 or 19 at the time. He was only like two years older than me. I think he had his right arm. But he didn’t have either leg or his other arm. He was telling me how he was working on getting his prosthetics, and it had been a roadside bomb (that wounded him). He was a Marine. I think he was deployed for not even six months before it happened. He told me: “There was no other destiny for me, other than to be a Marine.” He said he knew since he was a little boy that he wanted to follow in his dad’s footsteps and serve our country. His father had also been a Marine.

I recognized what he had already given up, and at such a young age. But yet, he had already lived such a full life because he was so proud of what he had done. Then, too, I saw on Facebook that he has all of his prosthetics now. He’s married. It seems like he and his wife are having the best time. It’s just amazing to know that he was so young when he became a Marine, and he was so willing to risk everything for his country. That will always stick with me.

What has been your favorite part about being an ALA member?

The impact that I know the organization is making. Like when we went to Walter Reed as part of ALA Girls Nation. There were many wounded warriors who said how grateful they are for The American Legion and the American Legion Auxiliary. They were happy we were there. They said it showed them someone was thinking of them, which is what I think our organization stands for overall.

Who is the veteran who made your Auxiliary membership possible?

This article originally appeared in the February 2018 Auxiliary magazine.