“Take care of yourself because you can’t give if there’s nothing to give,” Kniffin said.

American Legion Auxiliary member and caregiver Amy Kniffin lost her Navy veteran father in February 2020. Although she helped her dad with her grandmother while he was sick, for the next two years, she became the sole caregiver for her 100-year-old grandmother, Dorlisca.

“I never thought I would be here,” Kniffin said. “I thought it would be my dad.”

Her father and grandma were living in Kniffin’s childhood home and she and her son, Dalton, moved in to care for Dorlisca.

“It was a little crazy mowing the lawn,” she laughed. “It brought back memories of high school. I find mowing the lawn very therapeutic. I put in my earbuds and ride around and sing.”

She still owns her home in town and has to mow the yard there, as well as continue doing
any other routine home care.

Kniffin has been a single mom for a long time, so taking on the caregiver role for her grandma made sense.

“It just fit that I would move in,” she said. “I didn’t think I would be here this long, but it’s just what family does. She’s comfortable, safe, and clean.” 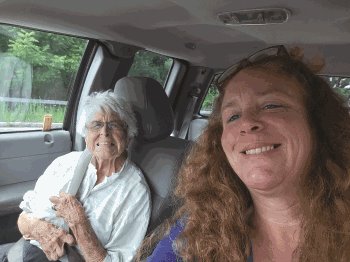 Caregiving is Kniffin’s full-time job. Prior to that, she focused on getting her son through high school and worked part-time as a substitute teacher and home health aide. She primarily does the personal care of her grandma while her sister takes care of the bills.

The home has an attached in-law apartment, so Dorlisca still has her own space.

When Kniffin first moved in, there were no locks on the doors — Dorlisca would go out at night. Kniffin made some changes to the house, including cameras, doorbells to alert movement, covered the thermostat and the garbage disposal, unplugged the stove, and added hand grips to the toilet.

“I did everything to make it safe,” she said. “And to make her life easier so she could be more independent as long as she could.”

Kniffin checks in on Dorlisca throughout the day, helping prepare meals and clean.

“In the summer, we sit outside for hours or go for walks down the driveway,” Kniffin said. “We have a nice breezeway between the house and apartment that we sit in. We talk about the past a lot. She has lots of stories. She’s seen horse and buggies, automobiles, and the Great Depression.”

Being a caregiver is tough with it often being a nearly 24/7 job.

“As a caregiver, you don’t get a weekend off or a day off,” she said with exhaustion, thinking about the last time she had one. “Once in a while, my son will help so I can get out at night. I’ve been looking for a little mental health counseling, and there doesn’t seem to be a lot available.”

Kniffin found a couple of support groups through the Alzheimer’s Association, but she’s looking for more of that one-on-one support.

There are seven stages of dementia, and it can vary for how long a person is in each stage.

“It’s a horrible disease,” Kniffin said sadly. “She’s not my grandmother like she was. It changes you.”

Part of that is the emotional and mental aspect that dementia can bring with it.

“You have to keep your cool because she says a lot of things that aren’t very nice,” Kniffin said. “I love my grandmother, but I don’t like her sometimes because of the awful things she says. I say, “Uh-huh” a lot. Don’t react — that makes things worse.”

Needing a little time to herself to be with her son and do other things, long-term care insurance pays for someone to come in once a day for three hours. Sometimes that respite period is spent grocery shopping or picking up medications. Other times, she gets to go to her trap shooting league, see friends, or just be away from the house for a bit.

As those who care for others have experienced, taking time for yourself is extremely valuable.

“If you get a minute and can take a shower and refresh yourself or change your clothes or sit outside, do it,” she said. “The person you are taking care of will be fine without you for a little while. Reach out to friends and family. Don’t be afraid to ask for help.”

Dorlisca G. Kniffin was placed in hospice care just before this Auxiliary magazine interview was conducted. She passed away a few days later. ALA National Headquarters sends its sympathies to her family and friends. A special thank-you to Amy Kniffin for sharing her story as a caregiver with us, even while Dorlisca was approaching end of life. We are deeply sorry for the family’s loss.