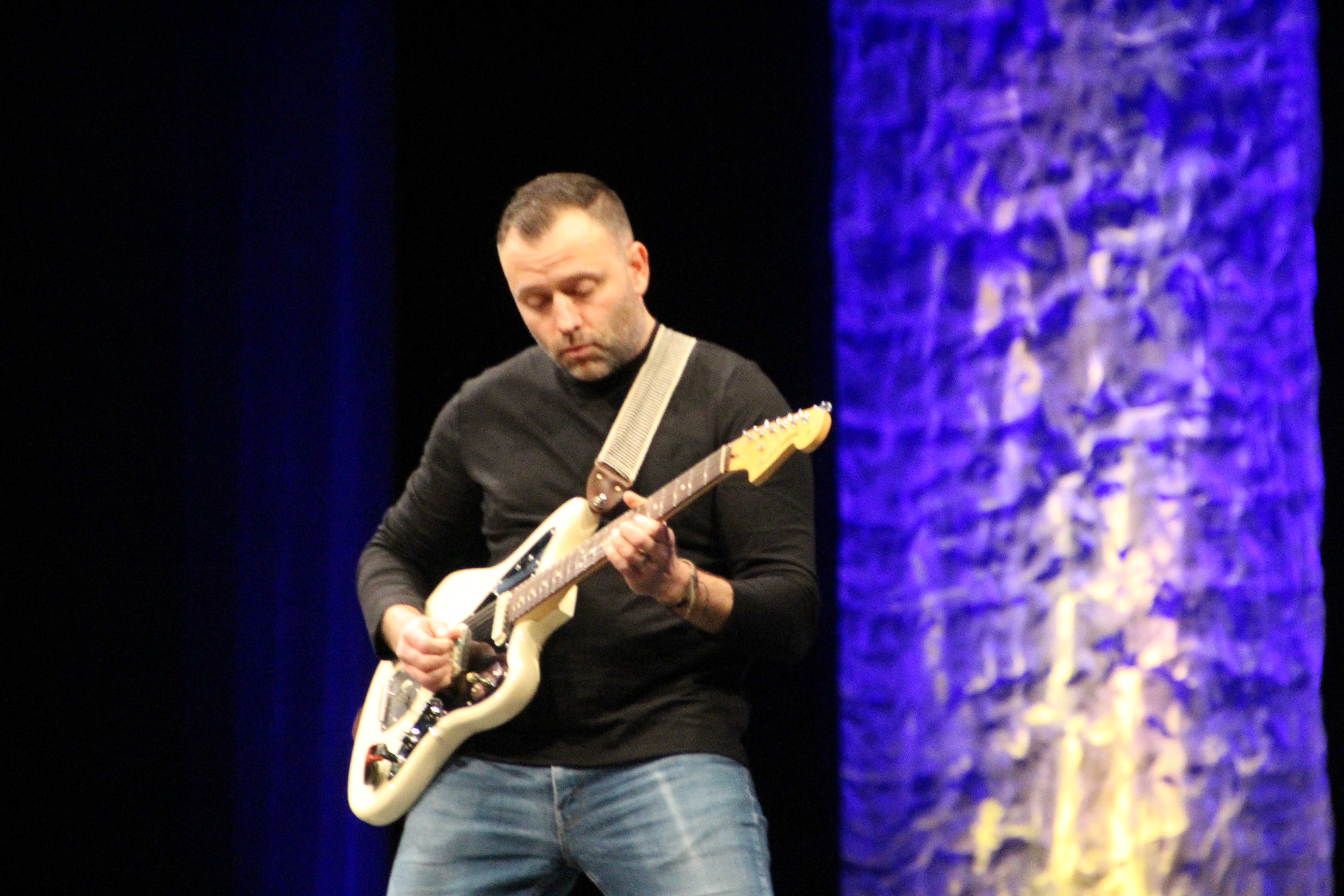 Imagine waking up after six months from being in a coma, even pronounced dead at one point, with no recollection that you are a talented piano player and singer.

About two years later, you are performing live on stage at the 2022 National Veterans Creative Arts Festival (NVCAF) in St. Petersburg, Fla.

This is what happened to Jackie Williams, one of this year’s NVCAF veteran participants.

Each veteran who attends the NVCAF has their own story to share, their own baggage they bring with them. For many, this is displayed in their craft, whether it’s visual arts, writing, or performing arts.

Co-presented by the American Legion Auxiliary and the U.S. Department of Veterans Affairs, this year’s Festival was once again in person after having an at-home event in 2020 due to the COVID-19 pandemic. With medical protocols in place, returning veterans loved seeing each other again and new attendees were quickly made to feel at home. The event brings together creative veterans throughout the country who made it to the national level after competing at local VA facilities. More than 3,600 entries were submitted to the local competitions, with over 2,000 entries judged at the national level in 150 categories of visual art, creative writing, dance, drama, and music.

The American Legion Auxiliary first became involved in 2000. At the local and national level, the Auxiliary’s support in volunteer hours and monetary donations both aid in enhancing all aspects of the event.

Auxiliary magazine talked to a few veterans to learn more about how being involved in this event at the local and national level has helped them through life-changing events.

Williams still can’t believe how far he has come in the last two years. 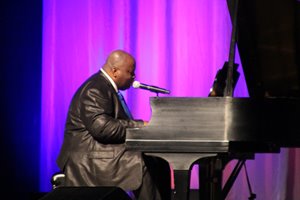 He has attended the Festival about six times over the course of 20 years. In early 2020, his mother was in the hospital and his dad wasn’t feeling well. After driving from Connecticut to New Jersey to get his dad into a hospital, Williams started feeling sick.

“I got transported back to Connecticut, and that evening, I fell asleep and never woke up for about six months,” he recalled of his coma due to COVID. “I had no idea where I was. When I woke up, they were in the process of taking me to the morgue; I had already died. So, when I died, I guess someone saw me opening my eyes. Then I went back into a coma for another two weeks and then I eventually woke up all together.”

This was just the beginning. Williams lost much of his memory. For example, he recognized the faces of his 13 children but didn’t know all the context and stories he had previously known. Williams also found out that while he was in a coma, he had lost his mother, father, other relatives, and several members of his church.

In addition to the memory loss, he had to learn to walk, talk, and breathe on his own again.

When he got home, he saw a keyboard in the living room, thinking that one of the kids must play it. His wife, Karen, told him that he was the one who plays.

“I had no memory and didn’t even have a desire to play,” Williams said. “I guess it had a lot to do with the fact that I didn’t know the role music had in my own life.”

Karen kept insisting that he play the piano every day.

For a few weeks, he hit the keyboard, but nothing came. Then he started hearing chords. It came to him one chord at a time. Eventually, the muscle memory came back. Williams had initially taught himself in the first place to play while he was in the military. When he realized he could play again, you couldn’t get him to stop.

“Music has been an important part of me, and it still is,” he said. “I have PTSD from the military. Now that I have my music back, I’ve been practicing only for my own healing. I really need it now more than ever.”

The song he performed for this year’s Festival was What the World Needs Now.

“I chose that song because when I was on the ventilator, I went through a series of nightmares and it was the worst nightmare of my life,” he said. “I can’t forget it. I needed to find a song that was going to be embraced by everybody, whether they believe in God or not, and that was the song that spoke to me. We have to be better in how we love people.”

Music has truly kept him going during his difficult journey.

“It’s not going to be easy,” he said. “I’ve got some challenges, but it’s game on. I got this second chance — this second opportunity at life.”

In a dimly lit room with a reading light shining over his words, veteran Rogelio Cervantes pauses while reading his creative writing story to his fellow NVCAF veterans, visibly emotional with each word he speaks. Holding back tears, those watching can see how personal this piece is.

While his pause in reading continues, his wife graciously joins him at the podium to finish reading his story to a captive audience who is eager to hear how it ends. She finishes for him, and applause erupts, with many in the room knowing how hard it is to share such personal feelings with others. Cervantes is surrounded by those who understand as he returns to his seat to listen to the next writer’s story. 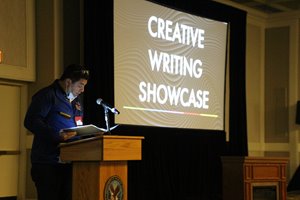 “Sometimes I have to stop reading it because I think about my sons a lot,” Cervantes said. “Like many veterans, ultimately when you have issues, your family are the ones who see us in the way we really are.”

Cervantes was encouraged by VA counseling services to submit his writing for the local Festival.

The story he submitted for NVCAF is Never Wake Up a Sleeping Dragon. It is about a child who is going to bed but finds a dragon asleep in his bed, so he’s faced with the dilemma about where he’s going to sleep and whether he should wake the dragon or not. As the story progresses, the dragon is his father.

“I wrote the story from what it was like for my children growing up with me — when normally a child can jump on their dad’s bed in the morning, wake up Dad on a Saturday morning, and watch cartoons and eat cereal — my kids couldn’t do that,” he recalled with heavy emotion. “A lot of veterans’ kids can’t do that. It’s a story for children who have a parent or brother or sister who has PTSD.”

He didn’t tell his kids why they couldn’t wake him up normally until they were older.

Cervantes said his writing helps with his PTSD. When writing, he tries to block off at least two hours a day, whether it’s for a project he’s currently working on, or an idea created from scratch.

He said he plans to submit another story for NVCAF in the future. Cervantes likes to focus on subjects that aren’t often as widely written about, like a child who has a parent with PTSD or a disabled veteran father.

For Cervantes, the power of the written word has been a life-changing tool in communicating with others and working through his PTSD.

“[Writing] does help me cope more than anything,” he said.

When David Smith is on the dance floor, all he cares about is his next movement. As he moves across the stage, he completely forgets that he has had prostate cancer for over 20 years.

“When I’m dancing, we have a saying — ‘There’s no cancer on the dance floor,’” he says, smiling, reflecting on the distraction that dance has brought to his life.

Smith was drafted in 1971 and went to Vietnam. That experience also exposed him to Agent Orange, an herbicide mixture used by the U.S. military during the Vietnam War. At 47, he had open heart surgery, and five years later, he was diagnosed with prostate cancer. He is 100% disabled from his exposure. 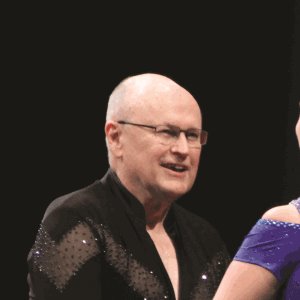 In 2007, he took a transatlantic cruise and they had rumba lessons on board. For six days, he took lessons, and when he returned, he participated in adult community education and met his future dance partner, Tara. Over the years, he kept taking lessons. In 2014, they competed.

“I won newcomer and I was hooked,” he said.

In 2017, a member of his dance group volunteered at NVCAF when the Festival came to Buffalo, N.Y. Smith said he had no idea the event existed. He later won gold for the 2020 NVCAF at Home, as well as the 2022 Festival.

“I can look at every guy and every woman here and say, ‘I know exactly what you’ve been through — you don’t have to tell me,’” he said. “Very few people in the world know what it’s like to serve your country and then to have injuries. They are here creating their thing — their artwork, writing poems, singing songs, playing instruments, dancing.”

Smith offers advice to other veterans who may be interested in entering the competition at the local level.

“The encouragement is that whether you get chosen for the national level or not, you are still participating in your own individual veteran community,” Smith said. “If there is anyone in the world who can understand what you are going through, it’s a fellow vet. Why wouldn’t you want to be around that encouragement, unless you’re at the point where you need clinical help, but this can actually be very therapeutic.”

Smith plans to enter another dance for next year’s competition.

“If I get picked again, it would be an honor because I am dancing right to the end,” he said. “I want them to bury me with my dance shoes on and I have a dance tux.”