Dayna Beyer is always looking for new ways to spread patriotism. The Ohio department historian and member of American Legion Auxiliary Unit 535 taught a “sip-and-paint” class as a fun educational activity for youth in the community. A volunteer at another local veteran organization, Love Our Heroes, Beyer offered hosting a painting class, with the paintings going to veterans and the proceeds benefitting veterans.

“A lot of people were shut in due to the pandemic; the post was closed down for a little bit, and a lot of veterans couldn’t go out of their homes, so we wanted to lift up their spirits,” said Beyer. 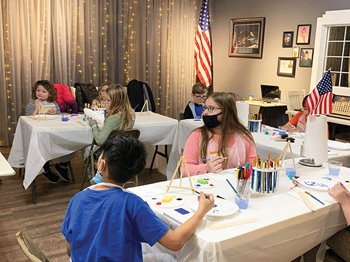 Located a block away from the post home in Bellville, Love Our Heroes is a thrift store and coffee shop where all profits are donated back to veterans. The coffee shop was closed because of COVID, making it the perfect opportunity to host a socially distant paint class with limited seating.

“We had 6-year-olds through 12-year-olds attend,” said Beyer. “The painting theme was Valentines, but the first thing they were to do was paint a rustic American flag, and the American flag paintings were then presented to veterans in the community.”

Continuing the ALA’s mission, Beyer had students honor veterans by reciting the Pledge of Allegiance, which was followed by a Q&A about the history of the flag, its meaning, and symbolism. Mainly teaching children the basics of the American flag, Beyer was impressed that many of them were able to answer questions and recognize the relationship between veterans and the flag.

Most sip-and-paints are unstructured for more social interactions and open discussion among painters, allowing the kids to be creative and connect with one another. After the Q&A and introduction, everyone painted an American flag while Beyer walked around to spark conversation.

“We are a very patriotic community, and we are really proud of the veterans we have,” said Beyer. “I think it’s up to us to get out there and take the initiative to help educate the kids … because who else would do it?”

After finding a poppy sip-and-paint idea in the ALA Poppy Facebook group, Beyer decided to incorporate the American flag instead to help spread patriotism during a time that needs it the most. There were easy step-by-step instructions to follow on how to host a painting class.

Wanting to spread patriotic awareness and have a fun-thrilled class for the local kids, Beyer added a second painting that was Valentine’s Day themed. The canvases came with their own easels for veterans to have a place to display the kids’ artwork. Beyer and her husband donated the frames and paints, and the children paid a small fee that included lunch. The rest of the proceeds went back to the veterans fund at Love Our Heroes.

“We had four kids ask if they could give their paintings to their grandparent or great-grandparent, and the rest were given to veterans in the community,” said Beyer. “The kids asked right away when they could come to another [session]. It was great how it all worked out.”

Beyer plans to host an event like this in the future because the turnout was good, and the project was an exciting way to educate the community’s youth about the American flag and get children out of their homes to safely socialize.

“It was good interaction for the kids, and it wasn’t just a playtime thing,” Beyer said. “There was a purpose behind it, and the feedback we got was very positive. So when we have something like this, which I think benefits all of us, people have more awareness and see that there still is a lot of patriotism in the communities, and we are still serving our veterans.”