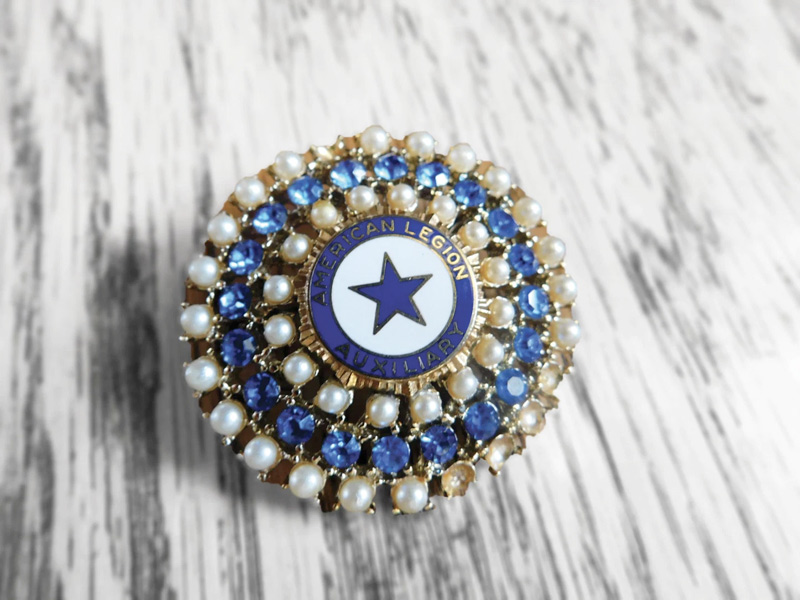 American Legion Auxiliary member Tammy Conklin Quinn has childhood memories of playing dress-up with her sister, Tasha, and often wearing their mother’s ALA ribbon bow pin, or the blue and pearl ALA brooch their mom inherited from their grandmother, Roberta Conklin.

It was OK. Their mom, ALA member Betty Conklin, gave them permission. Plus, Tammy and Tasha were ALA Juniors, signed up by their mother shortly after their births. Even at their young ages, they knew these ALA costume jewelry pieces meant something special to their mother. Betty Conklin only wore the pin or brooch to ALA functions, but she trusted her daughters with them.

“This ALA jewelry represents being in a military family and being an ALA member. My mom was just very proud of that and proud of the veterans and servicemembers in our family. She wanted to help all the vets, including my dad, John Conklin — who was a Navy Vietnam War veteran. My grandfather, Orville Conklin, was a Navy World War II veteran. My uncles, and so many other relatives served our country, too. Mom was proud of them all,” Quinn said.

During those carefree days of childhood, it never occurred to Quinn just how important the pin and brooch would become to her later in life. Nor did she ever think about inheriting the jewelry. But she did, and it happened much sooner than anyone expected. Quinn’s mother died when she was in seventh grade. The pin and brooch were among numerous items she inherited.

In addition to the sentimental value of having something her mother and grandmother treasured, the pin and brooch took on additional meaning for Quinn. They came to also symbolize the home atmosphere she and her family found in the ALA and The American Legion Family.

ALA Unit 100 in Columbus Junction, Iowa, the unit to which Quinn, her sister, and her mother originally belonged, extended support to the girls when their mother died. The unit paid membership dues for Quinn and her sister until they graduated high school.

Knowing she was unable to attend meetings and other activities, Quinn did not continue her membership after that. From there, her life took her in different directions — away from home, Unit 100, and her post home.

Through the years, the pin and brooch took on yet another meaning for Quinn.

“They became reminders that I needed to find another unit and post home that were good fits for me. My family has always been big on patriotism, giving back to the community, and being part of the ALA and Legion Family. Plus, I love helping people. That was an ALA bond involving my grandmother, mother, and me. I needed to get back to that. Now that I’m in a unit and post home I love, I’m so grateful,” said Quinn, a member of ALA Unit 1990 in Nesbit, Miss.

Quinn said she plans to leave the pin and brooch to her niece, if she joins the ALA. Otherwise, the jewelry will be left to her current ALA unit.

One of Lisa Liford’s prized possessions is the American Legion Auxiliary crystal brooch that has passed through three generations of ALA members in her family. The brooch originally belonged to Lisa’s grandmother, ALA member Martha Gillespie; then to her mother, ALA member Sue Liford Freeman, who gave it to Lisa.

It is eye-catching to see the crystals capture white light and separate it into the bright colors of a rainbow. But the true beauty of the brooch is more than the metal that frames its edges, or its crystals and their kaleidoscope-like light show.

“It’s a beautiful piece of jewelry. But there’s purpose and meaning behind it. There’s American Legion Auxiliary pride that you won’t find behind regular jewelry. My grandmother was an active ALA member, supporting our programs. Then, my mom ended up with the brooch — and she has worked our programs and our mission for 70 years. That makes it even more special to me. I have been an ALA member for 56 years,” said Liford, an Honorary life Member of ALA Unit 18 in Bloomington, Ind.

The brooch was among the other possessions Liford Freeman, an Honorary Life Member of Unit 18 in Bloomington, inherited after the passing of her mother, Martha Gillespie. Liford Freeman waited for the right time to give the brooch to her daughter. She found the perfect moment: just before Liford was installed as ALA Department of Indiana President (2014-2015).

“It’s a very special piece of jewelry for me because I feel as if I always have bits of my grandmother and my mom with me when I wear it,” Lisa Liford said.

“We grew up as a Legion Family. My grandmother was very active in the Auxiliary. She was the one who signed me up for the Auxiliary when I was born. Her husband — my grandfather, Navy veteran Charles Gillespie, served in World War II. My mom has been a very active member. My father, Navy World War II veteran, John R. Liford, was active in The American Legion. I have four brothers. They were all Sons of The American Legion members. My mother worked for the Department of Indiana for 22 years as their secretary/treasurer. There’s just a lot of Auxiliary service, and a love for that, in our family.”

ALA membership continues in Lisa Liford’s family, and this ALA brooch will be given to another generation of the family.

“I will, in turn, pass the brooch on to my daughter, Molly Brown, who is a 22-year member of The American Legion Auxiliary. It will mean a lot to me to give that to her,” Liford said. Brown is a member of Unit 18 in Bloomington. She served as Indiana’s ALA Honorary Junior Department President (2010-2011) and (2014-2015).

“This snowflake [brooch] makes me think of my mom and my dad, and all we did as a family with the purpose of helping veterans and their families. The ALA was a big part of our lives. My little brother was a Sons of The American Legion member, and he was active in that. It’s what we did. My stepfather, Dick Frederick, was an Army World War II veteran. I plan on passing this snowflake pin on to one of my nieces who is an ALA member.”

“This sweater guard was my mother’s. It’s very precious and has some sentimental value. That ALA emblem is very important to me, too. The sweater guard stands out. People see that emblem. That then opens the door for me to talk about the Auxiliary, our programs and what we do, and about our Legion Family. That is also precious to me because I want everyone who’s eligible to join the ALA, or other parts of our Legion Family, to do so. As for the future of this sweater guard, I will pass it on to my niece, ALA member Pam Mobley of Unit 97 in Auburn, when the time comes. I know she’ll pass it on to her daughter.”

The late Beatrice Williams Barnard, an American Legion Auxiliary member, had a small collection of ALA jewelry. Among those pieces are the ones shown here: a photo locket charm bracelet and a turtle pin. Barnard’s daughter, Jane Jorgensen, received these and other pieces, after her mother passed away. Several years ago, Jorgensen decided these and other ALA jewelry items should be given to family … the ALA family. The jewelry was donated to ALA Unit 1 in Titusville, Fla., where Barnard served as unit president (1956-1957). The pieces have been placed into a shadow box to be displayed at their Post 1 home, said Unit 1 President Cathie McMullin.

All of the pieces of jewelry featured in this article appeared, at some point, in at least one of the older catalogs of Emblem Sales.

There’s also an assortment of patriotic pins and tacks, plus plenty of useful items for ALA units, Legion posts, Sons squadrons, Riders chapters, and their programs.