There were veterans in Carlene Ashworth’s family before she was born, and there will be veterans in her family long after she is gone. That’s why she recently decided to leave a planned gift to the American Legion Auxiliary Foundation.

“If you are dedicated to who we are and what we do as an Auxiliary or American Legion Family, you should really consider leaving a planned gift, so we know there is going to be something there after you are gone,” Carlene said. 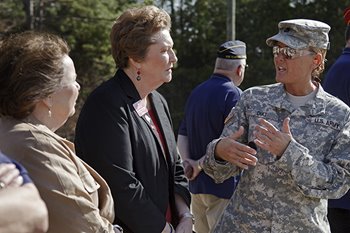 Dedication is more than a word for Carlene, who has spent the last 55 years devoting her life to serving veterans, military, and their families with the American Legion Auxiliary at every level.

Through that service and her extensive military family experience, she has seen so much that the average American may not understand. Her father, multiple uncles, husband, son, and granddaughter all served in the military at some point, and witnessing their service shaped her into the person she is today.

Carlene was also deeply impacted by the stories she heard throughout her travels when she served as national president of the ALA in 2010-2011. When visiting a U.S. Department of Veterans Affairs hospital, she met a 22-year-old veteran who was staying in the psychiatric ward.

“He told me the reason he was there was because when he came back home, his family just had no connection with him at all; they could not understand him and why he had changed so much and how his life had been affected,” Carlene said.

“He had a lot of conflict with his parents and his family, and it had taken a real toll on him.”

Carlene said she will never forget that young veteran’s story, which really showed her the lack of understanding civilians have for what our heroes go through, no matter when or where they serve.

To help bridge that gap, members of Carlene’s Auxiliary unit work diligently alongside their local Fisher House and the DeGeorge hotel, a renovated hotel that was turned into a veterans homeless shelter, to provide meals, supplies, and most importantly, someone to talk to. During her ALA unit’s monthly visits, Carlene hears more stories from veterans of all ages and generations, making her even more passionate about supporting the work of the Auxiliary in every way she can.

“We need to take care of all of our young military men and women who are in the service right now and as they grow older, and that is going to be a lot of years past my time,” Carlene said.

“That’s our legacy, that’s who we are, that’s what we do, and that’s why we matter.”

Get started today at www.ALAforVeterans.org/planned-giving.