I Am the ALA: Marjorie Costello 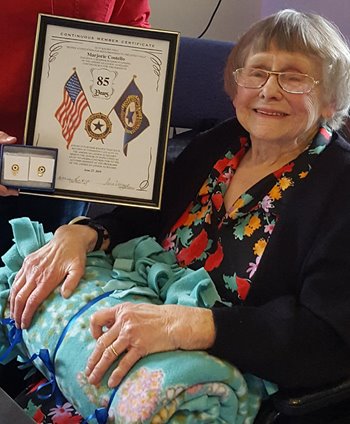 The Junior Auxiliary Unit 161 started in 1939. I started out as a color bearer at 9 years old. It was fun. We didn’t have TV in those days. Unit 161 was famous for fabulous dinners and dessert parties. The Auxiliary would decorate tables and help serve dinners. At times, there would be 300 to 400 people during holidays and district meetings. Our uniforms were a white blouse, navy blue skirt, and a red grosgrain ribbon around the neck.

We had mother silver teas for the Gold Star Mothers. We made our own cookies. The silver tea party taught us how to honor the mothers and serve formal tea.

What influenced you to keep your ALA membership all these years?
I have always felt honored to serve our veterans. We girls had so much fun — the senior Auxiliary made it fun. We met so many good friends. They were like family. My folks loved it. My four brothers belonged to the Legion, and my sister was in the American Legion Auxiliary.

In 1947, I attended the first ALA Washington Evergreen Girls State, held in a Bellingham, Wash., Teachers College.

After school during World War II, we would go over to a neighbor’s house to learn first aid and attend cooking class to help at home.

I received a 1,000-hour pin after serving 1,000 hours of volunteer service at the VA hospital. We had an ALA Christmas Gift Shop every year at the VA. We used Unit 161 Auxiliary money to buy items. All during the year, we purchased sweaters, bathrobes, towel sets, books, art sets, dress shirts, wallets, children’s toys, embroidered pillowcases, vases, rings, and jewelry. We would always have cookies, coffee, tea, and punch. The veterans would pick out items at the gift shop to give to their own families. So much fun! I miss those days.

How has being in a military family impacted your ALA membership?
My love of helping people, my love of the flag, and love of my country.

What projects are you working on now?
Membership, historian, and ALA Girls State.

What does the ALA centennial celebration mean to you?
We have successfully kept an organization together to help veterans and their families.

SHARE YOUR MEMBERSHIP STORY! Tell us about yourself and how you support the American Legion Auxiliary as a unit member who also loves the ALA’s mission of serving veterans, the military, and their families. Contact us at ALAMagazine@ALAforVeterans.org or (317) 569-4500.