Coming from a large military family, Idaho American Legion Auxiliary Unit 143 member Dale Snipes honors veterans across the country on her Honda Goldwing motorcycle trike. Snipes, an 82-year-old great-grandmother, has over 55,000 miles on her Goldwing from traveling to various military bases and veterans events.

“I had murals put on my bike to honor each of the conflicts, and have driven across the U.S. and back, stopping at various military bases and events along the way to give thanks, and honor the folks there,” said Snipes. 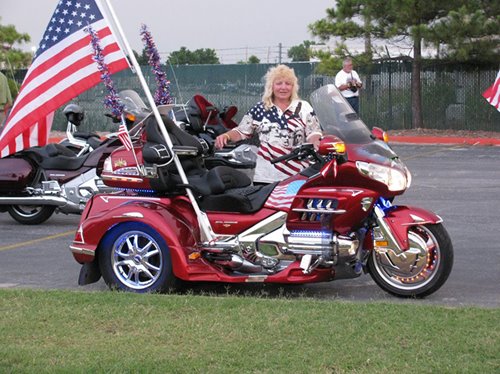 In tribute to her father, Lloyd Clement, who served in World War II, Snipes has a mural on her bike that illustrates the raising of the flag at Iwo Jima. Her late husband, Walter Snipes, served in Korea, so his mural is of the Russian MiG and the American fighter jet. Snipes has sons-in-law who served in Vietnam – their mural scene is of a soldier standing by an upturned rifle and pair of boots. Her grandson and granddaughter have been deployed to Iraq, and that war scene is of a trooper with a gun in a Hummer.

“It’s a way to say ‘Thank you’ and show that I’m proud of our veterans, and veterans from all wars,” said Snipes.

Across the back of her Goldwing is an American flag with the slogan “Freedom’s Never Free!” and an American eagle is on the front to symbolize and honor our free country. Snipes has a built-in speaker system that she plays patriotic music from, making her a fan favorite at veteran events across the country.

“I’ve ridden to New York, Florida, and all the states in between. Whenever we are going to be in the area with a military base of any kind, we stop to say hello and thank [the servicemen and women] for what they’re doing,” added Snipes.

The American Legion Auxiliary’s mission is serving our nation’s veterans, military, and their families — the reason Snipes joined our organization. But her patriotic spirit and support for the military encouraged her to expand her horizon and ride with other likeminded people or groups.

“There’s a group called the Patriot Guard, and when a servicemember comes back from overseas, we go to the airport and welcome them home,” said Snipes. “It’s really cool because there will be a lot of us and we all have American flags, and we are lining the airport with them. As soon as the servicemembers come out, we start clapping, and pretty soon everyone in the airport starts clapping. It’s really beautiful.”

This article was originally published in the Feburary 2021 Auxiliary magazine.