November 10th was a good day in American military history

More than likely, on Nov. 10, 2019, you’ll hear a lot about the 50th anniversary of Sesame Street’s premiere on PBS TV. For many of us who learned our ABC’s and numbers from the Cookie Monster, Kermit, Elmo and Ernie, it will be an occasion to relive our childhoods.

However, November 10th also was a great day in America’s military history. We found some intriguing events that occurred on this day. Take a look to expand your knowledge about those who served our country.

1775 — “The Few, The Proud, The Marines.” That recruiting slogan has helped define the U.S. Marine Corps for several decades, but this armed service branch dates back to Nov. 10, 1775. That’s when Congress formed what was then known as the Continental Marines. Their assignment? To conduct ship-to-ship fighting, provide shipboard security, and assist landing forces. By the way, the Navy was the last of the services to open its ranks to women. It announced in 1943 that it wanted to recruit 1,000 female officers and 18,000 enlisted volunteers. When the war ended two years later, 820 female officers and 17,640 enlisted female volunteers had served. Today, women make up 7.11 percent of the Marine Corps. It was only in March of 2016 that a gender integration plan was approved for the Marines, allowing women to apply for combat jobs.

1919 – And, of course, the American Legion Auxiliary, the world’s largest women’s patriotic service organization, is celebrating its 97th birthday today. That means it’s just three years away from hitting the big 1-0-0! If you have family ties to a military servicemember or veteran, you can join us in honoring and supporting them. Learn more about how you can become a member of the American Legion Auxiliary here.

1954 — This date also was eventful for many veterans as the Marine Corps War Memorial was opened and dedicated in Arlington, Va., in 1954. Often described as the Iwo Jima Memorial, this national monument was inspired by a photograph taken during the Battle of Iwo Jima in World War II. It depicts six Marines as they raise a U.S. flag on Mount Suribachi. It is dedicated to all U.S. Marine Corps servicemembers who have died since 1775. 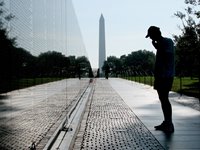 1982 — Another significant war memorial was opened to the public on this date in 1982. The Vietnam Veterans Memorial, which is located near the National Mall in Washington, D.C., often is simply referred to as “The Wall.” It features the names of all servicemembers killed during the Vietnam conflict. The designer of the memorial, Maya Lin, who was a 21-year-old Yale University student at the time, said she wanted to create a design that avoided the controversies of the war. “The politics had eclipsed the veterans, their service and their lives,” Lin said. Many visitors often touch the names etched into the wall as they honor those who lost their lives.