Planned Giving: How Peggy Thomas answers the call and serves our nation’s heroes in need 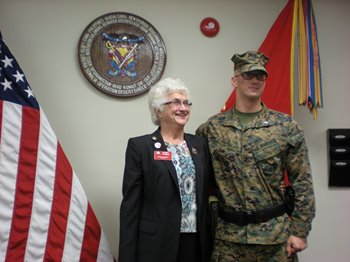 Peggy Thomas, a Past National President and 39-year member of the American Legion Auxiliary, has spent her entire life as a witness to the needs of veterans and military servicemembers.

All seven of her brothers and her sister served in the military — three in the U.S. Air Force, two in the Marines, one in the Army, one in the Navy, and her sister in the Women’s Army Corps. The service impacted each of their lives in different ways, but even as a young girl, Peggy could see the toll it took on each of them.

“My oldest brother in particular, when he came back from the service, he would have horrible nightmares and my dad would have to jump out of bed and go try to calm him down,” Peggy said.

As Peggy grew, so did her knowledge of veteran and military need. She met her husband, a U.S Army veteran, in 1957, shortly after he was discharged from his service in Germany. When she later became the spouse of a veteran, Peggy joined the American Legion Auxiliary to support heroes in her community.

When Peggy became the ALA national president in 2012, she had an even closer look at how veterans across the globe are impacted by their service and the help they need.

While in Germany at a medical center, Peggy had the privilege of meeting with wounded servicemembers and expressing her sincere gratitude for their service.

In the Far East, Peggy saw a need for computers so that servicemembers could apply for college courses and connect with their families. It was then that she asked for the Auxiliary’s support.

“I asked if we could try to raise $8,000 for this project, and we ended up raising over $30,000,” Peggy said. Thanks to the donations, the ALA was able to purchase not only the eight computers and two printers they had originally budgeted for, but additional electronic equipment to enhance the well-being of military servicemembers all the way across the globe.

That generosity, and the power of ALA members to create real change and provide opportunities for our nation’s heroes, inspired Peggy to start her own financial gift. She made the decision to include a gift to the American Legion Auxiliary Foundation in her will. 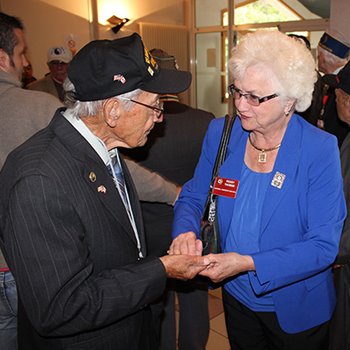 “What I have seen, what I have witnessed — that is why I think it is so important that everyone has some way of giving to the ALA Foundation,” Peggy said.

Whether it is by joining the Legacy Society with a planned gift in your will or giving a small amount each month to the ALA Foundation, Peggy knows the donations will all add up to make a large impact.

“I think if people knew that you could just leave a small amount — one person can make a difference. We have 600,000 American Legion Auxiliary members, and if everyone left a small gift, it could still do a lot,” Peggy said.
Above all, Peggy’s life experience has shown her that veterans today need the support of the Auxiliary and will continue to rely on it for years to come.

“This is a way we can carry on the mission long after we are gone, because it is so important,” Peggy said.
“I just think that somebody has to do it, and if it is not us, then who?”

Do your part in securing support for veterans, military, and their families for future generations by becoming a member of the Legacy Society today. Learn how at www.ALAforVeterans.org/Planned-Giving.