At 88 years old, Edith C. Bush has lived through decades when the daily chances of her, or other Black Americans, encountering some form of discrimination was as certain as the sun rising each day. America’s long gone legalized racial segregation, which bolstered the evil doctrine of white supremacy, was in place for much of Bush’s life. 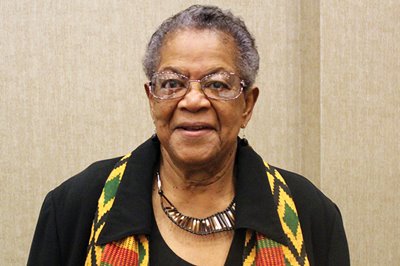 The resulting overt and covert oppression of Black Americans was the norm in those days. Add to that race-based inequities, harassment, death threats, and unwarranted violence — sometimes lethal — aimed at many Black Americans.

Instead, Bush chose a path of harmony and unity among all people, in all parts of life. Bush continues to love America, plus its principles of freedom, democracy, and equality. And she cares deeply for those who protect and defend the United States and its interest.

Bush does all of this as an enthusiastic member of the American Legion Auxiliary, a community of volunteers serving veterans, military, and their families. She is a member of Unit 199 in West Palm Beach, Fla.

A retired elementary school teacher, Bush joined the Auxiliary in 1999. Her ALA membership eligibility is based on the military service of her brother, U.S. Navy veteran Alvin Edward Coleman.

Why are you enthusiastic about being an Auxiliary member?
I’m excited to be part of ALA because we are associated with organizations that can provide help for military people and their families. We work on making sure our veterans are taken care of, whether it’s picking up their medication when they can’t, making sure they have food, or whatever. We must help them because they did something for all of us: They served our country.

How can ALA members help others during the pandemic when we’re told to socially distance?
If you can’t visit nursing homes or places like that, ask around to see who knows someone who could use some cheering up. Reach out to them with a phone call or video chat. Talk to them or read them a poem or scripture. Sing them a song. Play some music. If you know you have some interests in common, use that commonality to bring cheer. These days, I know we can all use some cheering up. Especially our veterans.

The ALA unit you belong to had only Black Auxiliary members until about 20 years ago when a white woman who met ALA eligibility criteria joined. She is still a member there. How have things been going?
She feels so comfortable being with us. We feel comfortable with her. We value her. It’s like what Dr. Martin Luther King Jr. said: Judge a person not by the color of their skin, but by the content of their character.

What’s the biggest life lesson you’ve learned so far?
My life lesson is my life’s motto: With the help of God, I want to do all I can for as many people as I can, for as long as I can. I got that motto from a convention or something like that. I liked it so much that I adopted it as my mantra.

What is the best advice given to you?
The best advice I’ve ever received is from the motto of Bethune-Cookman University, my alma mater: “Enter to learn and depart to serve.” By serving others and making them happy, you can become happy yourself.

On a personal level, what have you gotten out of being an American Legion Auxiliary member?
I’m a three “F” person: faith, family, and friends. The ALA is where I get my feeling of faith, my relationship where we are almost like a family — and we’ve got these beautiful friendships among us.

This article was originally published in the February 2021 Auxiliary magazine.